Another mass shooting, another missed opportunity to talk about common-sense gun control. But humor me if you will.

The argument about guns in America has continually devolved into two diametrically opposed camps: those armed to the teeth and those attempting to destroy liberty.

What a tragedy in itself.

It’s important for both sides to be honest. Every time our country experiences a mass-casualty shooting, it doesn’t take long for talking heads on either side to begin spinning off statistics–and fear. Someone inevitably will decide that “now” is “not the time” to talk about regulation, gun ownership, etc. in the wake of the tragedy.

We always seem to forget when the “right” time to talk about it is.

I used to think that the biggest defenders of the Second Amendment were those who used guns for hunting and as a means of personal protection. A third reason–and truly, the spirit of the amendment–is that a citizenry with access to weapons has the means to protect itself from an overrun government bent on imposing its own nefarious will on its people.

That still doesn’t change the fact that semi-automatic assault rifles like the ones used in the Newtown, Pulse nightclub, and now Las Vegas shootings (to name only three) simply don’t have much purpose in our society. When you combine rampant loopholes in gun purchasing regulations with cheap and readily accessible high-capacity ammo magazines, not to mention legal modifications that enabled the Las Vegas shooter to simulate fully-automatic functionality, these weapons make for convenient and efficient killing machines capable of sending seasoned cops into a spiral of post-traumatic stress disorder.

Lots of gun owners–including the spokespeople for the NRA, if you go back enough years–support universal background checks and gun registration legislation. Both of those points have been lost in the finger (and muzzle) pointing.

So how do we regulate guns in a way that is practical and that promotes safety? 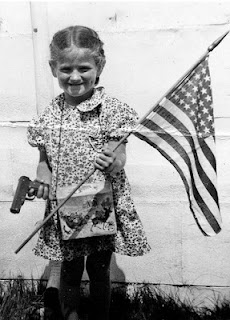 A good analogy here, one that often appears in this debate, is to compare government regulation of the auto industry to what we might someday hope to achieve with guns.

You cannot buy a car today that doesn’t meet certain government-mandated regulations. Your car has limits on the amount of pollution it emits. It must meet gas mileage requirements. It must provide safety restraints and demonstrate the ability to protect you in certain kinds of crash scenarios.

Further, when you buy a car, you must register it with your state authorities. In North Carolina, you must insure your car in case you inflict damage to another vehicle or personal injury to its driver. You must have your car regularly inspected. You must be licensed–and keep your license updated–to operate the vehicle. And whenever you move your residence to a different state, you must comply with the same kinds of laws regarding your vehicle and license.

But let’s think about the Corvette.

The Corvette, for all intents and purposes, is not the safest car you could buy. It’s small, lightweight, and awesomely fast, but it offers very little in terms of demonstrated safety components in cases of an accident.

The highest speed limit that I know of in our state is 70 mph. But the speedometer on your stock-issue Corvette reaches much, much higher.  You can’t drive a NASCAR race car on the interstate, but you can drive a Corvette. How does that work? Because we’ve reached a sensible and actionable level of regulation for cars.

Many of the frequent objections to gun control begin to fall apart when you put them in the context of how government regulates automobiles:

So what if we simply treated guns like cars? I’d be okay with someone owning a “long gun” if they had to pass a stringent background check to buy it. And I’d be okay with someone owning that gun if they had to be licensed to fire it, and if they had to maintain that license by demonstrating proficiency about the weapon and knowledge about its safe operation. And I’d be okay if, just like speed limits are there to prevent us from breaking the sound barrier during morning rush, the government limited the capacity of the ammunition magazine you plugged into your gun.

And consequences? Break the law, and you earn an appearance in court and a meaningful fine. Break it badly enough, and you lose your privilege to own a gun. If you’re a chronic offender, your gun is impounded.

The Second Amendment is there for a reason. I don’t buy the argument that because it was written in the Age of Muskets it ought to discount semi-auto guns, because it was also written in the time of slavery and a time when women couldn’t own property or vote. The Constitution is a breathing document that shouldn’t be interpreted literally based upon its context.

Still, our right to bear arms isn’t a blank check. There are boundaries that surround our other constitutional freedoms. And our society is overdue for legislation that will protect innocent lives by enacting common sense limits on our populace’s ability to bear arms.

AUTHOR’S NOTE: I have adapted this op-ed from an article I originally published in February 2013, following the Newtown school shootings. Yes, I’ve been beating this drum for a long time.

This site uses Akismet to reduce spam. Learn how your comment data is processed.